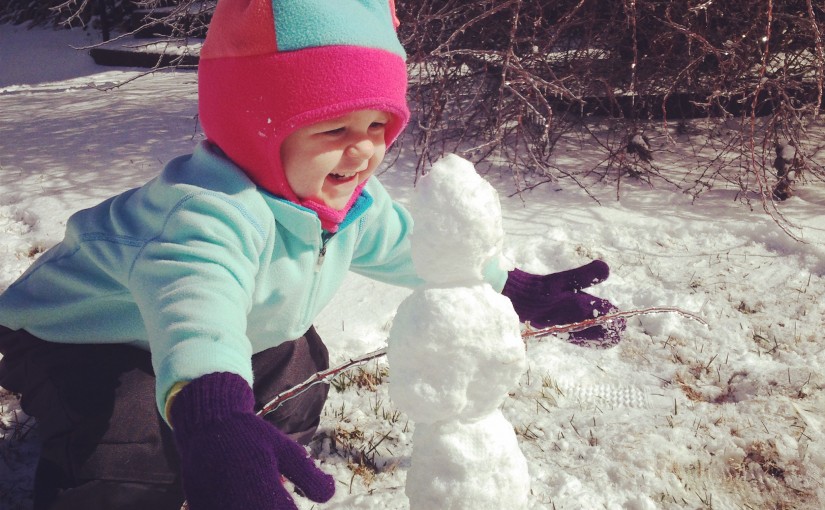 Greetings from day 5 of #Snowpocalypse 2015! Nashville has had snow since Sunday night/Monday morning. Almost all my appointments have been cancelled as they have popped up on my calendar. To date I’ve updated my operating system and my phone, moved a ton of old pictures and videos to an external hard drive, roasted a chicken on a bed of root vegetables, made chicken and dumplings with Brooks and Stephanie rolling out the dumplings, a red curry, oven pancakes with a fruit compote, oatmeal porridge, and an eighth of a new scarf. I also have spent approximately six hours making duplo houses and washed all but one basket of laundry in the house, including a duvet cover and pillow shams. We made three snow babies on the one day there was snow on top of the ice. And we watched the karaoke version of Frozen once as snow was falling outside. Our heat pumps can’t keep up at night so we’re now all sleeping under down comforters and in layers since the temperature drops so fast once the sun goes down. And my friends with broken bones and sprains count is up to three. There has been a quick reprieve before it’s supposed to start sleeting again. I’ve been to my office twice and restocked at the grocery store once. I’m actually writing this from Ugly Mugs, where the rest of East Nashville is sharing every available chair to avoid sitting at home for another minute. It’s quite the time and I couldn’t enjoy it more.

When people relocate to Nashville from somewhere up north (I know there is nuance between one state to the next but I’m about to generalize), they often ask me about snow days and why the whole city shuts down for a little bit of snow. This is often accompanied with snickers. I advise them to pretend it’s a free vacation day and go with it. The reality is that snow is so infrequent in the South it’s more cost effective to not prepare than it would be to prepare for such infrequent occurrences. Although if this week’s weather repeats itself a la global warming/weirding the math could change. Having grown up in Arkansas I can remember the shock and excitement of a handful of snow days. They’re like waking up to an instant holiday. Why would anyone want to miss the fun and go to work or school? And since no city seems to have a snow plow or enough salt to coat the roads, who can drive safely anyway? I don’t have a snow shovel or more than a shaker of salt to my name. My one little plastic scraper broke when I scraped off our cars Wednesday. Which brings me to my next point, almost no one in Nashville has a garage so our cars are just sitting outside collecting ice and snow as it falls.

Stephanie and I have loved every snow day we’ve shared for the last fifteen years. This week brought us three with a toddler. And we quickly adjusted to being together non-stop as compared to our usual ships passing in the night way of life.

What I most appreciate about the snow is that it locks us inside with all of our past decisions. The distractions of work, driving, shopping, eating out, running errands, schedules they’re all gone. I guess you could lose yourself in a video game or episodes of some show, but even that gets old eventually. You look up from some chores or tv, and you’re still snowed in with the same people in the same place you started. You either love it, yay-you chose well! Or you hate it, time to collect $200 and start again.

Other than snow ice cream, the big treat of a snow day is getting to do what you enjoy without all the distractions and time constraints of everyday routines. I haven’t cooked as much as I did this past week in all of 2015. And when except an occasional Sunday morning have I made a whole duplo house on the floor with Brooks? It’s not because I made a list or had it on the calendar, it’s just what I woke up and did that day.

I may be a little bit hopeful that the snow forecasted for today and Sunday night doesn’t come so that we can all return to our normally scheduled lives Monday morning. However, whatever the weather brings, I’m most thankful we like our neighbors, our dogs, our creaky bedroom floor, and each other. Our next house is going to have just a tad bit of gas heat and a fireplace, though. And for all my clients from the North, I now understand why you didn’t get heat pumps or why they’re so prevalent down here.

Posted in Keep Up With Kate